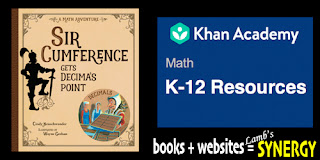 The Decimal System is a numeral system for denoting integers and non-integer numbers. Decimals are sometimes identified by a decimal separator known as a decimal point like 3.14.

Read the recently published picture book, then learn more at the website:

SIR CUMFERENCE GETS DECIMA’S POINT by Cindy Neuschwander is the latest book the popular Sir Cumference series exploring mathematics concepts. Set in a fictional medieval kingdom, this historical adventure introduces children to the decimal system through an engaging story featuring a baker and a family of ogres.

KHAN ACADEMY is known for their short videos with accompanying lessons. The math section provides a series of lessons for each grade level such as an introduction to decimals.

Posted by Annette Lamb at 2:46 PM No comments: 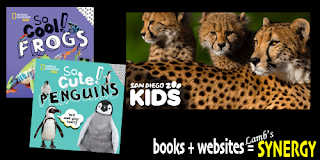 Animals come in all shapes and sizes. In general, they consume organic matter, breathe oxygen, move, and reproduce. Zoology is the study of animals.

Read the recently published nonfiction series for youth, then learn more at the website:

Each book in the SO COOL, SO CUTE series from National Geographic kids features a fascinating animal such as pandas, koalas, sharks, and leopards. The latest books in the series include frogs and penguins. Designed for ages 3 through 7, these short information books include photographs along with quirky fonts, child-like graphics, and humorous, informative text designed for their young audience. Although filled with useful content, their informal style will attract children seeking a little fun with their facts.

Posted by Annette Lamb at 3:18 PM No comments: 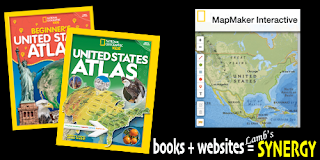 An atlas is a collection of maps representing the Earth or a particular region. Traditionally, they were bound into large books. However, today’s interactive atlas allow users to view features such as political boundaries or geographic elements through transparent layers.

Read the recently published atlases for youth, then learn more at the website:

BEGINNER’S UNITED STATES ATLAS (third edition) is an effective way to introduce atlases to children ages 7 to 10. The book begins with an introduction to maps. The attractive format uses maps and photographs to explore the land and its people. Icons are used to highlight key features. Divided into regions (northwest, southeast, midwest, southwest, west, U.S. territories), the atlas explores each state in a two-page spread. It concludes with a review, glossary, and charts.

UNITED STATES ATLAS (sixth edition) is designed for ages 10 to 14. Like the beginner’s version, it is organized by region and highlights each state. The maps are more detailed and the text provides a more in-depth examination of each state than the beginner edition.

MAPMAKER INTERACTIVE from National Geographic allows users to explore locations around the world through the use of a base map and layers. Students begin with a base layer such as streets, terrain, topo, or satellite. Then, they can add layers such as water, human population, climate, and history to explore an area in depth. Finally, users can use the tools provided to personalize, save, and print their map.

Posted by Annette Lamb at 2:10 PM No comments: 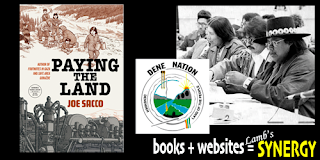 Also known as the Athapaskan people, the Dené Nation is a group of five indigenous tribes located in the Northwest Territories of Canada. Sustained by the land for over 30,000 years, the political organization represents the land claims and protection of Aboriginal rights. Their homeland stretches from the Yukon and Alaska to the southwestern United States.

Read the recently published graphic nonfiction, then learn more at the website:

PAYING THE LAND by Joe Sacco is set in the subarctic Canadian Northwest Territories where the indigenous Dene people have lived for more than 30,000 years. This work of graphic nonfiction explores the impact of resource extraction on the natural world and the indigenous people who live in the Mackenzie River Valley. Sacco recounts the costs and benefits development has had on the land and its people.

The DENE NATION website features a history page that provides insights into history of the Dene Nation. The page includes both recent history along with a timeline of key events.

To visit the Dene Nation page, go to https://denenation.com/about/history/

To visit the Dene Nation History page, go to https://denenation.com/about/history/

Posted by Annette Lamb at 1:16 PM No comments: 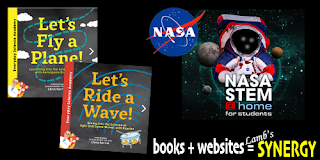 Everyday science connects children with the natural world and advances in technology through stories and activities that spark curiosity and discovery. Hands-on experiences, explorations and experiments bring a child’s surroundings to life.

LET’S FLY A PLANE! and LET’S RIDE A WAVE! by Chris Ferrie are the latest two books in the EVERYDAY SCIENCE ACADEMY SERIES. Each book features Red Kangaroo and his friend Dr. Chris as they explore science questions. The engaging narrative highlights key vocabulary and incorporates everyday experiences into the scientific explanations. Each book concludes with a glossary, questions, and hands-on experiments. The topics in this series align with the STEM curriculum.

The NASA STEM @ HOME RESOURCE is a new website focusing on a wide range of activities that families can do together at home. Divided by grade level (K-4, 5-8, 9-12), the project also includes sections specifically focused on students working from home with resources such as e-books, family activities, virtual tours, and podcasts that “bring the universe into your home”. The Aeronautics @Home section is just one example of how the Everyday Science Academy Series books easily connect with the NASA resources.

Posted by Annette Lamb at 4:41 PM No comments: 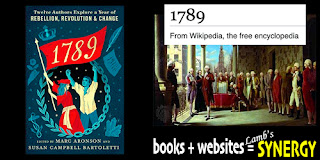 The year 1789 is a landmark year around the world including the start of the French Revolution. In the US, George Washington was elected the first President of the United States in February. The first Congress met in March to declare the Constitution in placed in effect and the beginning of the United States.

Read the recently published middle grades book, then learn more at the website:

1789: TWELVE AUTHORS EXPLORE A YEAR OF REBELLION, REVOLUTION, AND CHANGE by Marc Aronson and Susan Campbell Bartoletti is an anthology featuring a dozen narratives written by award-winning nonfiction authors. While some focus on rights and freedoms in the US, others explore issues of enslavement, change, and struggles from around the world.

Wikipedia’s timeline pages provide a useful starting point for exploring key years both in the United States and around the world.

Posted by Annette Lamb at 3:02 PM No comments: 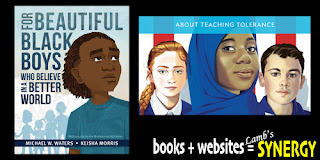 In its Declaration of Principles on Tolerance, UNESCO defines tolerance as “respect, acceptance and appreciation of the rich diversity of our world’s cultures, our forms of expression and ways of being human. It is fostered by knowledge, openness, communication, and freedom of thought, conscience and belief. Tolerance is harmony in difference.”

Read the recently published children's picture book, then learn more at the website:

FOR BEAUTIFUL BLACK BOYS WHO BELIEVE IN A BETTER WORLD by Michael W. Waters and Keisha Morris tells the inspirational story of a boy growing up in a world of racism and gun violence who learns the importance of hope and activism. This timely, honest picture book includes a discussion guide to jump-start conversations about respect, nonviolence activism, and diversity.

The TEACHING TOLERANCE website helps parents and educators start difficult conversations about topics such as racism and violence.

Posted by Annette Lamb at 2:34 PM No comments: