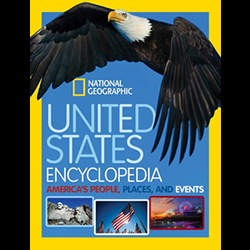 The UNITED STATES ENCYCLOPEDIA from National Geographic Kids takes a visually stunning look at America’s people, places, and events.
The attractively presented reference book begins with a chronology of U.S. history containing maps, timelines, graphs, and photographs. Sidebars feature key people, places, and events. This section ends with a look at Washington D.C.
Next, the book provides an in-depth exploration of the regions of the United States including the Northwest, Southeast, Midwest, Southwest, and West. Each section begins with a map and overview of the region. Then, details about each state are provided including a timeline, map, and key facts.
This fascinating reference source concludes with an examination of the U.S. territories along with facts, figures, lists, and key historical documents. In addition, resources, a glossary, index, credits, and a map key are provided.
Librarians will find that this visually-appealing reference book to be popular with middle grade students. Use it as the focus for a display focusing on regions of the United States. Students doing projects on states and regions will find lots of interesting background information to jumpstart their projects. However, they’ll need to go elsewhere for in-depth information about their state or region.
Published by National Geographic Kids on September 22, 2015. ARC provided for review.
Posted by Annette Lamb at 3:00 PM No comments: