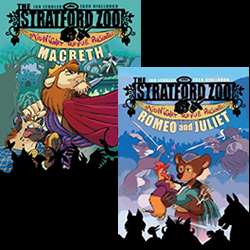 THE STRATFORD ZOO MIDNIGHT REVUE PRESENTS graphic novel series by Ian Lendler and Zack Giallongo is an engaging way to introduce youth to the works of Shakespeare.
Designed for the middle grades, Macbeth is the first book in this graphic novel series. A group of animals puts on plays for an animal audience at their zoo. Their first production is MacBeth. This child-friendly retelling includes the basic structure of the play along with hilarious comments from the audience during the performance. Although the most famous lines are evident, the play is shortened to focus on just the key elements.
Romeo and Juliet is the second book in this growing graphic novel series. In this fantasy adaptation of the famous play, animals are both the actors and the audience members. The brightly colored illustrations will draw young readers into the story and provide an engaging introduction Shakespeare for middle grade youth.
Librarians will find this series to be a wonderful way to introduce Shakespeare’s greatest works. Consider building literature circles that focus on each of Shakespeare’s key works.
To learn more about Ian Lendler, go to http://ianlendler.com/.
To learn more about Zack Giallongo, go to http://zackgiallongo.com/.
Published by FirstSecond, an imprint of Macmillan.
Posted by Annette Lamb at 3:00 PM No comments: