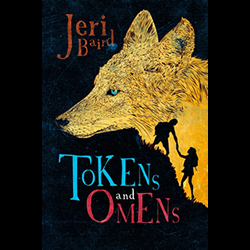 TOKENS AND OMENS by Jeri Baird is the first book in an exciting new adventure fantasy series filled with secrets, challenges, and a quest for survival.
The sixteen-year-olds in a rural village spend months preparing for a dangerous “rite-of-passage” known as “The Quest”. During this time, they receive tokens and omens based on their behavior. Although the quest is intended to test individuals, the teens soon discover that Fate may have something else in mind that has implications for the entire village.
Told in alternating chapters through the eyes of two teens, the story addresses thought-provoking questions about fate, friendship, and choices making the novel much more than your typical fantasy fare.
Librarians will find this fast-paced fantasy popular with teens who enjoy Hunger Games along with the many other recent titles that incorporate quest and game components. With well-developed characters, refreshing magic elements, and believable world-building features, this book can stand-alone. However, most readers will be looking forward to the next installment of this engaging young adult series.
To learn more about the author, go to https://jeribaird.com/.
Published by Jolly Fish Press on July 19, 2016. ARC courtesy of the publisher.
Posted by Annette Lamb at 3:00 PM No comments: 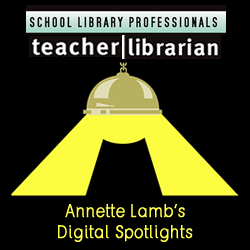 Along with book, app, and website reviews, we’re going to begin sharing digital collections with fascinating primary sources and other types of objects. While many of these collections were developed by academic and public libraries, they’re useful for school libraries and classroom teachers seeking out interesting primary sources to share with youth. You’re probably familiar with the Library of Congress, National Archives, and other large collections, so we’ll explore some smaller, more focused collections.
Posted by Annette Lamb at 11:42 AM No comments: