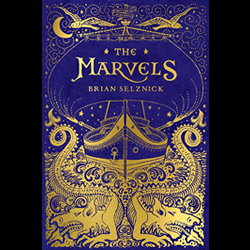 THE MARVELS by Brian Selznick is an amazing journey that crosses hundreds of years.
This middle school novel is told as two stories: one through drawings and the other through prose. From a 1766 shipwreck through multiple generations working in a London theatre, the first half of the book takes a visually stunning look at a family of actors through 1900. The written section of the book begins nearly a century later with a runaway named Joseph who goes to live with his uncle in a mysterious house. Exploration of this strange home reveals clues to Joseph’s past and family. The book concludes with a visual exploration of the house and an author’s note discussing the fact and fiction behind this fascinating children’s novel.
Selznick does an amazing job immersing readers in the world of 18th-century London and the literature of the time. Careful readers will notice the many connection between the visual story and Joseph’s world. Youth will enjoy the authentic emotions expressed by the array of characters.
Librarians will find that fans of Brian Selznick’s unique approach to storytelling will be captivated by this latest work. However, the book may be overwhelming for some children. Consider starting them with Selznick’s earlier works to prepare them for the many visual and text clues that make his books so complex and captivating.
To learn more about the book, go to http://themarvels.scholastic.com/.
To learn more about the book and the author, go to http://www.themarvelsthebook.com/.
Published by Scholastic on September 15, 2015. ARC courtesy of the publisher.
Posted by Annette Lamb at 3:00 PM No comments: