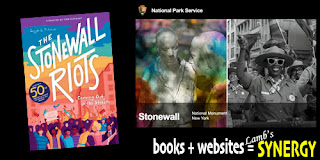 The Stonewall Uprising included a series of protests by the gay community in the summer of 1969 after a police raid in New York City. Many historians consider this event to have sparked the LGBTQ+ movement that continues today.

THE STONEWALL RIOTS: COMING OUT IN THE STREETS by Gayle E. Pitman tells the story of the 1969 demonstrations that launched the LGBTQ+ movement.

Visit the Stonewall National Monument National Park Service website to learn about the site of the Stonewall protests. The website contains a history of the events and connections to the people, parks, and places associated with LGBTQ heritage.

Posted by Annette Lamb at 12:30 PM No comments: